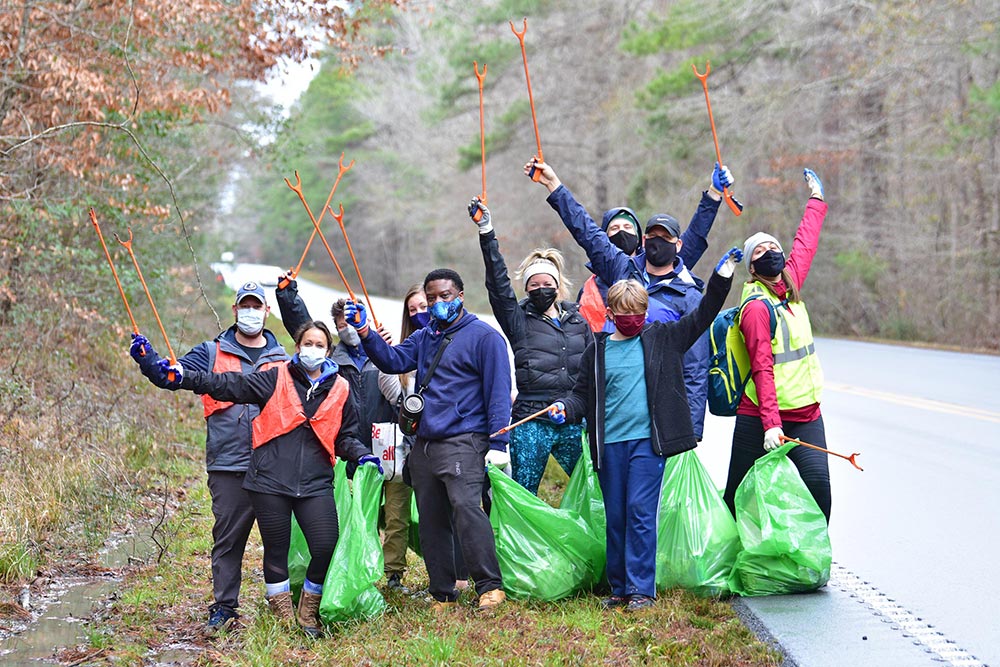 On the first Saturday of every February, volunteers make the trip to Francis Marion National Forest to participate in a large-scale cleanup effort. Now in its 14th year, the cleanup first started in 2003 through a partnership between PalmettoPride (South Carolina’s anti-litter and beautification organization), Charleston County and the United States Forest Service. Ongoing illegal dumping concerns and a desire to create a statewide cooperative trash cleanup initiative led to the formation of a jointly planned cleanup event that would target specific areas within Francis Marion National Forest that are most prone to dumping. The very first cleanup event had a mere 35 participants. Five years later, in 2008, the three groups initially involved in the cleanup were joined by Berkeley County, whereupon an official name was created. Since then the cleanup has taken place annually.

The Francis Marion National Forest Cleanup aims to recruit as many volunteers as possible in order to have the maximum impact during the forest cleanup through news spots, newspaper articles and social media engagement. Volunteer counts have been as low as 40 individuals in 2008; however, the average is 300 to 350. Surprisingly, the highest turnout was in 2020, when a record-setting 711 volunteers showed up. This year (2021) had 512 volunteers.

Participants have hailed from as far away as Charlotte, Wilmington, Brunswick, Savannah and Jacksonville. The South Carolina State Guard typically also recruits around 30 volunteers to help with logistics and focus on cleaning areas near Boggy Head Rifle Range. Regular volunteers include several Jeep Clubs, Blueway Adventures and Edisto River Adventures; the latter two take kayaks and clean along the waterways.

In total, 4,417 volunteer participants over 14 years have cleaned a whopping 290.41 tons of trash. During the initial cleanup event, the Forest Service counted over 100 illegal dumpsites spanning Francis Marion National Forest’s 259 acres, and over the years the annual cleanup campaign has had to revisit many of the originally identified sites, as well as begin cleaning newly discovered areas.

Items collected include building materials, household trash, illegally dumped large items and debris that fell off of vehicles onto the road. Old, discarded tires are a frequent find and account for 13.46 tons alone. There have been burned out cars and truckloads of household furniture, not to mention appliances and six motor/speed boats — one which even had a small tree growing through the middle of the boat.

Keep Berkeley Beautiful and the Berkeley County Solid Waste Authority provide three to five dumpsters for each event. Last year, a total of four dumpsters were filled: three with household waste and general garbage and one with tires.

For those interested in participating, the next cleanup will be held February 5, 2022. It typically runs from 9 a.m. to 12 p.m. with a thank you luncheon after the cleanup effort has ended. For more information or to sign up later this year, please visit palmettopride.org and check the events tab and calendar.