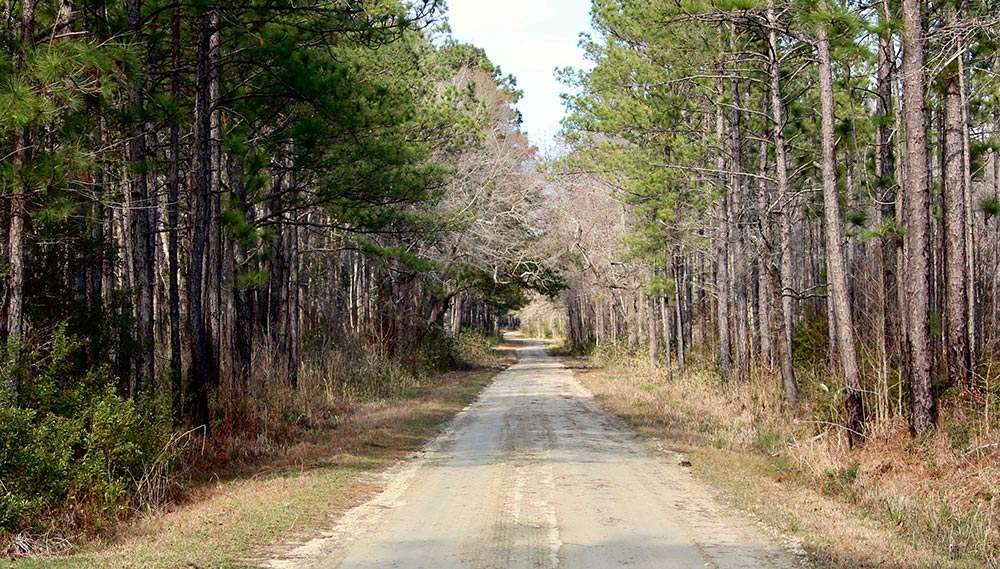 Imagine taking a moment to step back in time. You spy a simple, unobtrusive path quietly meandering through the woods and forest wetlands. It has been worn into being by the feet of Sewee Indians, who live on a strip of land stretching about 30 miles between the Santee River and the coastline. They have dubbed this nondescript trail the Broad Path and use it to conduct business, trading their deer and bear products with northern and inland tribes such as the Kiawah, Edisto, Stono, Combahee, Ashepoo, Wimbee, Coosa and Santee.

The first European settlers to settle in this area are the French Huguenots — Protestant refugees who are escaping persecution in their home country of France. They begin arriving in 1687, and within a little more than a decade, as many as 70 French families are settled into plantation sites along the Santee River, trading with the local natives and prospering. They build the first church here, the Brick Church. They also travel the 36-mile Broad Path.

Meanwhile, English trading and colonization have continued along the Atlantic coast since the mid-1600s under the direction of British King Charles II. He commissions a 1,300-mile thoroughfare stretching from Charleston to Boston. The Broad Path will become part of this but will also enjoy its own identification as the road from Charles Town to the English Settlement and the King’s Highway, also called Old Georgetown Road. It will be employed as an official postal road; a means for visiting friends and families in the colonies and a transportation route for naval stores including pitch, tar, turpentine, resin and lucrative plantation products such as rice and cotton.

The road will also become strategic for moving Revolutionary troops and supplies and providing an escape route for General Francis Marion, also known as the “Swamp Fox,” and his men. President George Washington will travel through here during his post-war exploratory tour of the Southern states in 1791. During the Civil War, the road will even offer Yankee General Cornwallis a convenient track for plundering South Carolina. He will, at some point, headquarter at Wambaw Plantation and arrest Rev. Samuel Warren, pastor of the Brick Church.

By the 1930s, much of the Old Georgetown Road, or King’s Highway, had been re-configured and renamed Route 40, which we know today as Highway 17. However, all is not lost. Approximately 6.6 miles of bypassed road has retained its familiar names and earned the honor of being the last and longest continuously unpaved public portion of the original 1,300-mile pre-Revolutionary coastal route. In fact, this little strip of unsurveyed real estate may be the oldest road in the state. Other than adding some gravel to make it less muddy, the road retains the look and primal feel of yesteryear.

Conveniently, another local historical treasure, the fourth oldest church built in the St. James, Santee Parish, sits about five miles down the narrow dirt road. The old Brick Church of Wambaw, erected in 1768 by wealthy plantation owners, poses rather primly but alone, surrounded by gentle forest. Most of the growth is new since Hurricane Hugo decimated the area in 1989, ripping out many of its majestic, moss-covered oaks.

The church structure was built of brick imported from England, but the four round front columns are composed of uniquely shaped bricks that were fashioned locally. The architectural style is Georgian. White doors and working shutters complement the red brick and white mortar. The little church is compact and significant without being pretentious. A picket fence marks the front yard, and a cemetery holds the remains of founding plantation owners.

Inside, the chapel has been described as sparsely beautiful. It is definitely austere and a bit stern. One of the two identical porticos was enclosed in 1852 to create a vestry room. Otherwise, untouched by the decades, the vaulted ceiling still retains its original plaster covering. Chest-high boxed pews crafted from hand-pegged cypress rest upon flagstone floors.

While the little chapel may have survived the ravages of war and time, its congregation did not. After the Civil War, the 13 families that had been the original Wambaw Church family relocated to McClellanville, a nearby coastal shrimping community. When muddy roads often made it difficult to return to the old Brick Church for services, a new Episcopal Chapel of Ease was built in the village and gradually became the permanent home for Sunday worshippers. It continues to offer regular weekly services today under the ministry of Rev. William L. (Roy) Hills, Jr. The old Brick Church reopens twice a year. Both the King’s Highway and the St. James, Santee’s Wambaw Church are on the National Registry of Historic Places and worth a friendly visit. Entrance to the King’s Highway is accessible between Rutledge Road and SC Highway 45.

Additional source:
Excerpts from the application to the United States Department of the Interior-National Park Service – National Register of Historic Places Registration Form to designate a portion of Old Georgetown Road as a protected road.