I’m pretty sure I gave Kara Bale a good chuckle during our golf cart ride to the Avian Medical Clinic when I innocently asked her if the birds who reside at The Center for Birds of Prey have names. After all, the various birds that have captured my heart through the years – from friends’ pets to cultural icons like Donald, Big Bird and Toucan Sam – all have names. 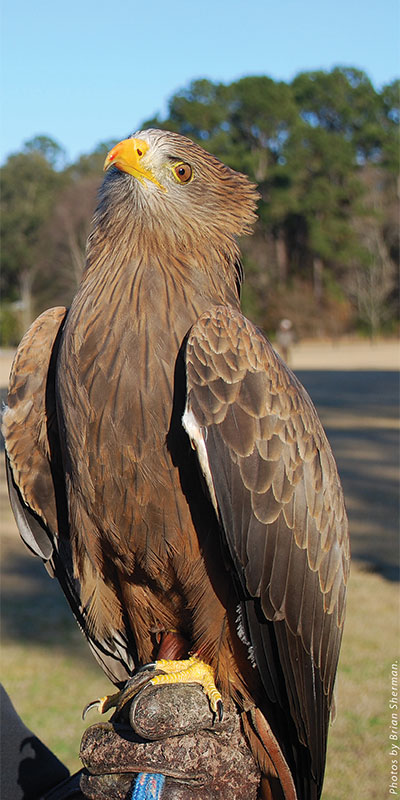 “It’s natural for people to want to anthropomorphize things,” Kara assured me. “But our birds are trained in a way that retains their wild characteristics. We don’t show you domesticated birds. So, no, they aren’t named.” Kara, who serves as the marketing communications manager at The Center, told me she considers herself “a lifelong environmentalist” as she circled dense clusters of trees in the golf cart until we pulled up to the clinic.

“I came here to learn more about being a good steward of the environment,” she explained, adding that promoting environmental responsibility is one of the key goals of The Center. From aiding sick and injured birds to educating the public on how to care for our native species, it’s a big job, and it’s handled wonderfully by people who take it seriously.

What exactly is meant by the term “bird of prey?” According to The Center’s guidelines, it’s any bird categorized as a raptor, catching its food – or prey – with talons. Raptors include hawks, eagles, kites, owls and falcons, to name a few. The Center is proud to have representative birds of 50 different species from different parts of the world.

Having just celebrated 25 years, The Center for Birds of Prey started as a small medical nonprofit, the brainchild of avian enthusiast and former commercial real estate agent Jim Elliott, who initially hosted operations in his own home. Much later, in 2008, attorney Joe Rice donated the land now known as home for more than 100 birds, and The Center has expanded to include a South Carolina Oiled Bird Treatment Facility.

“Beginning solely as an avian medical center and evolving into a comprehensive organization that combines educational, research and oiled bird treatment disciplines – along with still treating thousands of injured wild birds – we now provide a level of substance and impact that I did not originally anticipate,” Elliott remarked. 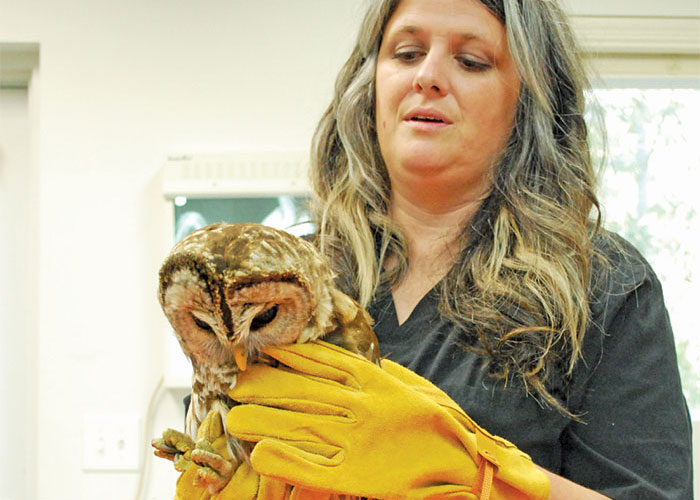 Upon our arrival at the clinic, Kara and I were enthusiastically greeted by Medical Clinic Director Debbie Mauney, who was hard at work with a male owl who had recently been hit by a car and suffered head trauma. I tried not to view him as a feathered Disney character but rather as an important part of the ecosystem as Debbie and her assistant, Emily Davis, gently picked the owl up – he wasn’t sleeping yet was remarkably calm – and moved him from the surgical table.

“We do amazing things here,” Debbie affirmed. “We admit injured and orphaned birds of prey – almost 900 last year – and although some instances require a trip to the local avian vet, we do most treatments here at the clinic.”

Once the birds are well, they either find a permanent residence at The Center or they go back into the wild blue yonder. Fifty percent of bird patients are released into their original environment if the environment is safe. If the bird happens to be from afar, a friendly volunteer often helps with transportation.

So who pays for the care and treatment these fortunate birds receive? Whomever is willing to help, according to Debbie. Donations fund most of the clinic’s operations, and a few grants fill in gaps as well. Bird lovers who are moved to help can do so in a few different ways: by donating funds, by volunteering time or by delivering birds to and from the clinic. 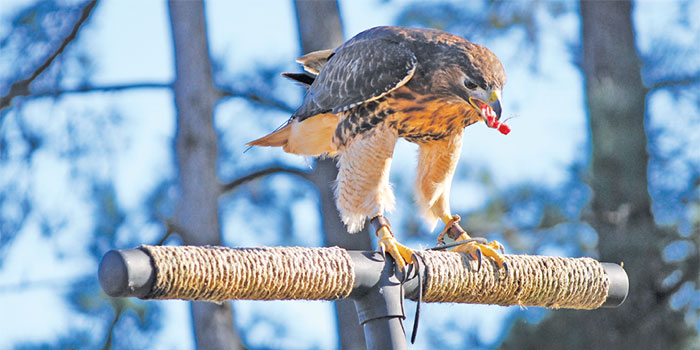 After we departed the clinic – and I had fallen in embarrassing and unrequited love with a red-shouldered hawk waking up from anesthesia – Kara and I headed to the South Carolina Oiled Bird Treatment Facility, a quieter area of the The Center. She showed me where, in the event of an oil spill, the birds would be gently cleaned with, yes, Dawn dish soap and water. The cleaning facility was surprisingly large, a very good thing in case of an environmental emergency.

“We are ready and waiting to clean birds,” Kara said, adding that volunteers who are willing to help in such a situation can be trained to clean birds as well.

Shortly afterward, I rounded out the sunny afternoon perched on a grassy knoll, watching Director of Education Stephen Schabel and Educator Natalie Hendrickson narrate and facilitate a beautiful demonstration of avian flight.

While Stephen is responsible for directing all educational aspects for The Center and has been for 15 years, there are three other educators: Natalie, Audrey Poplin and Jessie Curry. Together, they share the vast responsibility of caring for birds, developing and teaching programs for the public and managing the captive breeding program to bring young birds into the fold. Besides breeding, new birds may be former clinic patients or brought in from other regions.

“We import birds from other parts of the world, and we trade with other facilities,” Stephen explained. “So about half of the birds are native and half are not. It’s nice to be able to talk about local birds as well as birds from other places.”

It was breathtaking, watching these large, graceful beings soar from treetop to treetop against a piercing blue sky. Stephen pointed out that the birds are actually free to do what they want – there’s nothing necessarily keeping them from flying completely away and not heeding his requests – but they understand that, after the performance, they will be handsomely rewarded with a tasty morsel.

“Calling someone a ‘bird brain’ should actually be a compliment,” he remarked. “These birds are incredibly intelligent.” 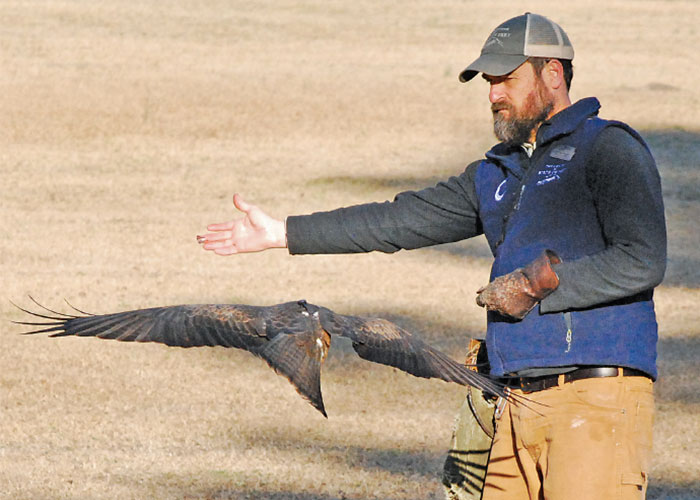