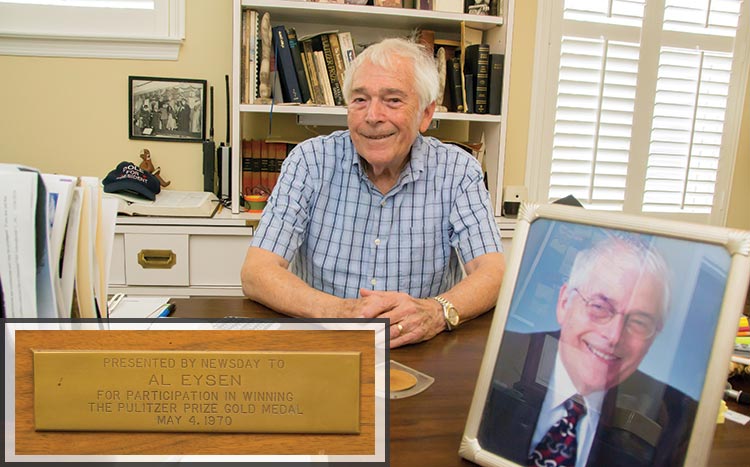 Dunes West resident Alan Eysen has been blindfolded more times than a statue of Lady Justice or a 6-year old at a piñata party – and by both sides of the law. But all that has only left him even more clear-eyed about a long and much-honored career in journalism, during which he was a key member of an investigative team that won the prestigious Pulitzer Prize Gold Medal, the Long Island University George Polk Memorial Award, the New York City Society of the Silurians Award and the New York State Publishers Award.

Today, Eysen has embarked on a new writing career, this time as a mystery/thriller novelist. “The Martini Club Mystery” is an outrageous tale of a group of educated, accomplished retirees whose regular social gatherings embroil them in a fraud and murder plot.


om what he calls his “gin-swilling guys telling tall tales” and his long and varied tenure as a newspaper reporter and editor.

“I always thought of myself as a print journalist,” he said. “I got into journalism because I wanted to tell people the truth – to tell them what was really happening in their world. To me, broadcast journalism wasn’t the same. It was and is essentially entertainment.”

Born in Brooklyn, New York, Eysen was a product of the “neighborhood” culture that prevailed at the time in communities like Coney Island and Brighton Beach.

“There were basically three kinds of neighborhoods then – the Irish, the Italian and the Jewish. I lived in the Jewish area so I sometimes had problems with kids from the other neighborhoods, especially the Irish!”

Once, he recalled, some Irish kids tried to rob him of his Monopoly set: “They were grabbing my Monopoly money so I punched one of them in the face, then ran like hell!”

It was a childhood that prepared him well for his later dealings with colorfully named mob figures such as Fat Tony, Crazy Joe, The Snake and The Hawk.

Eysen’s first foray into journalism began during his years at Queens College, where he earned his bachelor’s degree. He went on to receive his master’s in Journalism from UCLA before serving as an enlisted man at the end of the Korean Conflict. After he was separated from the service, he found a job at the once popular tabloid, the New York Daily Mirror, as a lowly copy boy, handling jobs from fetching whiskey to actual copy runs for editors and columnists, including the legendary Walter Winchell.

Believing that journalism meant more than running errands for his bosses, Eysen took a job at a weekly newspaper in Monticello, New York, where he quickly learned that he was not only its sole reporter and editor but its daily radio newscaster as well. From there, he moved on to a daily in Middletown, New York, and, ultimately, to Newsday, which was just coming into its own in the booming suburban areas of Nassau and Suffolk counties, as well as portions of Queens.

As a Newsday reporter, Eysen was first a generalist, covering everything from town board meetings to five-alarm fires. Ultimately, he was a founding member of the paper’s investigative team, headed by Bob Greene. One day Eysen’s wife, Rella, received a call at home from “a very polite man” who said that if Eysen wanted a big story from Big Julie, he should drive to a desolate street that evening and wait. He did not tell his wife that Big Julie was a reputed hit man – who was later convicted of murdering his mistress. Minutes after Eysen arrived, a car pulled up behind him. A stranger got out and ordered him get in his car. He was then blindfolded and driven to a private home, where he was walked up the front stairs, then down into the basement, where the blindfold was removed. Then Big Julie came down the stairs waving a bottle of scotch. He was alleged to have beaten a union organizer to death with a claw hammer. All Eysen could think was, “Is this guy going to beat me to death with a single malt?”

Instead, the two men shared a drink, and the mobster, clearly seeking some revenge of his own, outlined a major government corruption and land fraud scheme that became part of Newsday’s ongoing probe of misconduct by public officials. The probe ultimately led to indictments, convictions, resignations and that Pulitzer Prize.

One of the most personally difficult aspects of the investigation was his confrontation with an unanticipated participant in a questionable land deal, the Suffolk County editor at Newsday, Kirk Price. Price died of a brain hemorrhage before the investigation into his deal was completed.

During an unrelated assignment involving the bloody Gallo-Profaci mob wars, Eysen found himself being blindfolded once again and transported to a meeting with an underworld figure. This time, his covert mission was arranged by investigators from the Suffolk District Attorney’s office. A mob soldier was ready to “sing,” but he would only tell his tale to Eysen.

After the Gallo-Profaci wars – the basis for fellow journalist Jimmy Breslin’s best-selling book, “The Gang That Couldn’t Shoot Straight” – Eysen became chief editor for the coverage of the infamous “Long Island Lolita,” 17-year-old Amy Fisher, who shot her boyfriend Joey Buttafuoco’s wife in the face in the doorway of her home.

Also during his long Newsday career, Eysen covered New York State politics in Albany. There his investigative reporting resulted in the indictment of the speaker of the Assembly on election fraud charges. Part of the scam he uncovered hinged on a so-called Liberal Party Committee said to be based in Manhattan. When a suspicious Eysen went to check on that company, he found that its business address was a vacant lot.

Alan Eysen wrapped up his newspaper career as Acting Nassau County Editor for Newsday, then turned his talents to political consulting for several years before moving to Mount Pleasant in 1994 to be closer to his son and grandchildren.

Asked about the Pulitzer Prize and his many other honors, Eysen almost brushes them off: “Being acknowledged for my work as a journalist is wonderful, but what I really miss is hanging out at a bar at 2 a.m. where all kinds of people would come in – hoodlums, cops, reporters.

What’s next for the now 85-year-old Alan Eysen?

“I’m working on a novel based on my military experiences, first as a psychiatric social work technician in a hospital’s locked ward and then as an accidental cog in the wheel of a secret Army laboratory.”

“I think that makes for a pretty good tale,” he added. “Maybe I’ll run it past some of the guys at the next meeting of the real Martini Club. And this time I’ll go into things with my eyes wide open.”